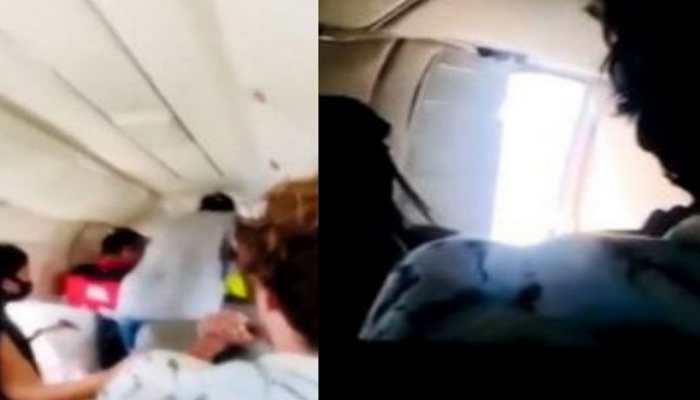 A woman has been arrested after a flight in the United States forced an emergency landing at 37,000 feet when she tried to open the plane’s side door. According to documents released by the US District Court for the Eastern District of Arkansas, 34-year-old Alom Agbegniou said mid-flight that “Jesus asked him to open the plane door,” as reported by Click2Houston. The incident happened on Saturday on Southwest Flight 192 from Houston, Texas to Columbus, Ohio.
Ms Agbegniou tried to open the flight’s door after she was reportedly frustrated that flight attendants blocked her from accessing the emergency exit, the outlet said.

Another dazed passenger intervened and tried to arrest Mrs. Agbegninau, but the woman bit him in the thigh. The man had to press his finger into his jaw to free himself.

According to court documents, the woman went to the back of the plane where she “looked” at the exit door. A stewardess quickly came on the scene and asked her to use the bathroom or be seated.

A passenger then heard someone say “she’s trying to open the door” and went to the rear of the plane to help. According to the documents, that was when Ms. Agbegniou cut him.

Once safely on the ground, Ms Agbegniou was arrested and escorted away by officers while the bite victim was being treated. The woman later told police that she had left home without telling her husband and was expecting to visit a family friend in Maryland.

According to the outlet, the woman also claimed that she “hadn’t been on a plane in a long time” and had “become very anxious and doesn’t usually do things like that”.

600 war crimes committed by the Russians in Kherson